There are many go-to saints for physical ailments and medical conditions, but little-known among them is St. Bartholomew the Apostle.

We don't have as much information about the life of St. Bartholomew (also known as Nathaniel) as we do the other Apostles, and in many ways he is a mystery to us. Yet, we have record of this beautiful exchange at his first encounter with Christ, from the first chapter of John's Gospel:

The next day Jesus decided to go to Galilee. He found Philip and said to him, “Follow me.” Now Philip was from Bethsaida, the city of Andrew and Peter. Philip found Nathanael and said to him, “We have found him about whom Moses in the law and also the prophets wrote, Jesus son of Joseph from Nazareth.” Nathanael said to him, “Can anything good come out of Nazareth?” Philip said to him, “Come and see.”

When Jesus saw Nathanael coming toward him, he said of him, “Here is truly an Israelite in whom there is no deceit!” Nathanael asked him, “Where did you get to know me?” Jesus answered, “I saw you under the fig tree before Philip called you.” Nathanael replied, “Rabbi, you are the Son of God! You are the King of Israel!”

Jesus answered, “Do you believe because I told you that I saw you under the fig tree? You will see greater things than these.” And he said to him, “Very truly, I tell you, you will see heaven opened and the angels of God ascending and descending upon the Son of Man.”

The understanding between Jesus and Bartholomew is hidden to us, however, we discover from this exchange that Bartholomew possessed great purity of heart. Jesus declared that in Bartholomew there was "no deceit." Other translations render this as "without guile" and "no duplicity."

This high praise stands in contrast to some unflattering things Scripture records about some of the other Apostles. As a result of his profession of faith, Christ promised Bartholomew that he would see Him in his heavenly glory. As Christ preached in his Sermon on the Mount, "Blessed are the pure in heart, for they will see God" (Matthew 5:8).

We can ponder how much Bartholomew's sincerity and honesty must have increased after he began to follow Christ; we can imagine his soul becoming almost angelic in its purity.

When I attended Mass on the feast of St. Bartholomew a few years ago, the celebrating priest remarked in his homily that the manner of his martyrdom was itself a witness to the great virtue of his inner integrity. St. Bartholomew was skinned alive; his body was made physically transparent as a fitting testament to the perfect transparency of his soul. 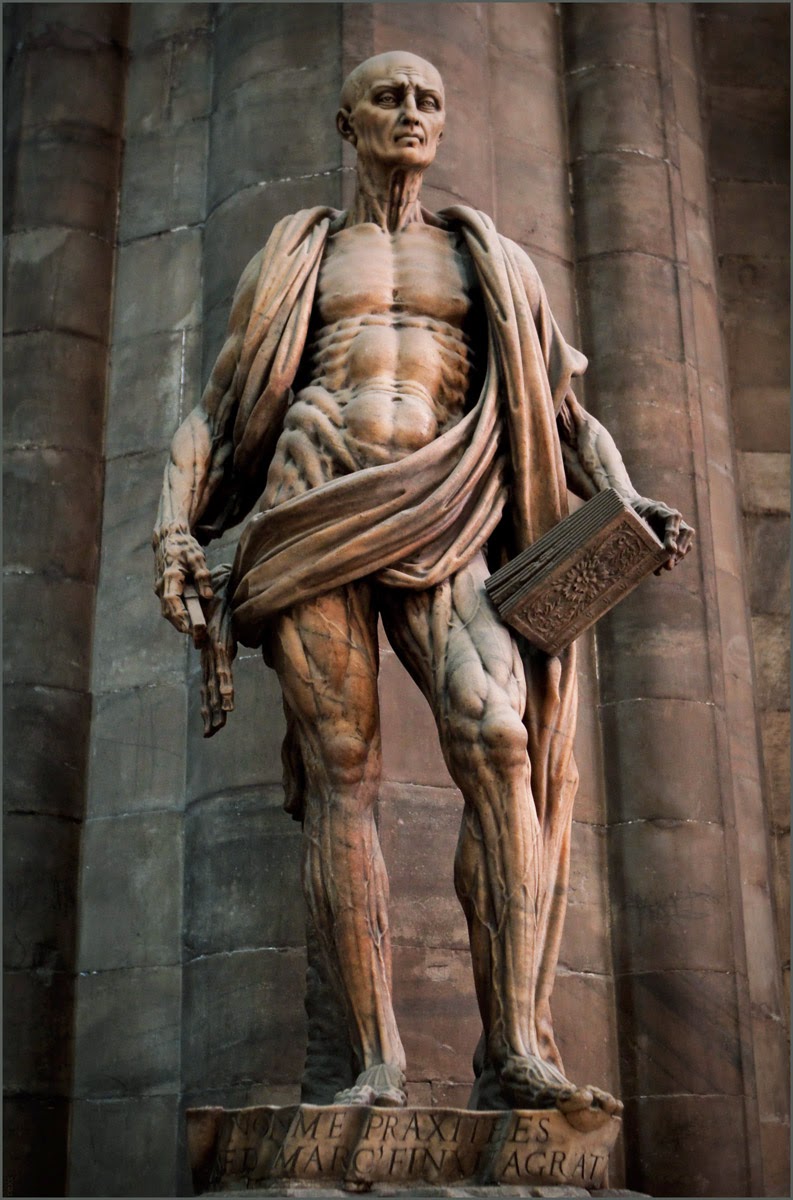 Because St. Bartholomew's skin was flayed from his body, thereby exposing his nervous system, he is the patron saint against nervous and neurological diseases and ailments.

His relics rest in a church that bears his name on a tiny island on the Tiber river in Rome.  Since ancient times Tiber Island was associated with medicine, and was used as a place of quarantine for those suffering from infectious diseases. The island's church was built in 998 A.D. directly over the ruins of a Roman temple dedicated to Aesculapius, the ancient Greek god of medicine and healing.

According to tradition, the saint's relics were moved from the place of his martyrdom in Armenia to Anastasiopolis in present-day Turkey. When the city was sacked by the Persians, the Christians fled with a chest carrying the Apostle's sacred relics. The chest was captured by the enemy and tossed into the sea. Miraculously, the chest floated in the ocean and washed ashore on the island of Lipari off of Sicily, where they were rescued by the local bishop. Many people were cured of their illnesses as the relics were carried in solemn procession to the church. In later centuries the relics were transferred to Benevento near Naples, and finally to Rome directly over the ancient site of the temple of Aesculapius. When St. Bartholomew's relics arrived on Tiber Island in the 12th century, the church was rededicated in his honor. Because of the island's long association with the health of the sick, a hospital was built there in the 16th century. 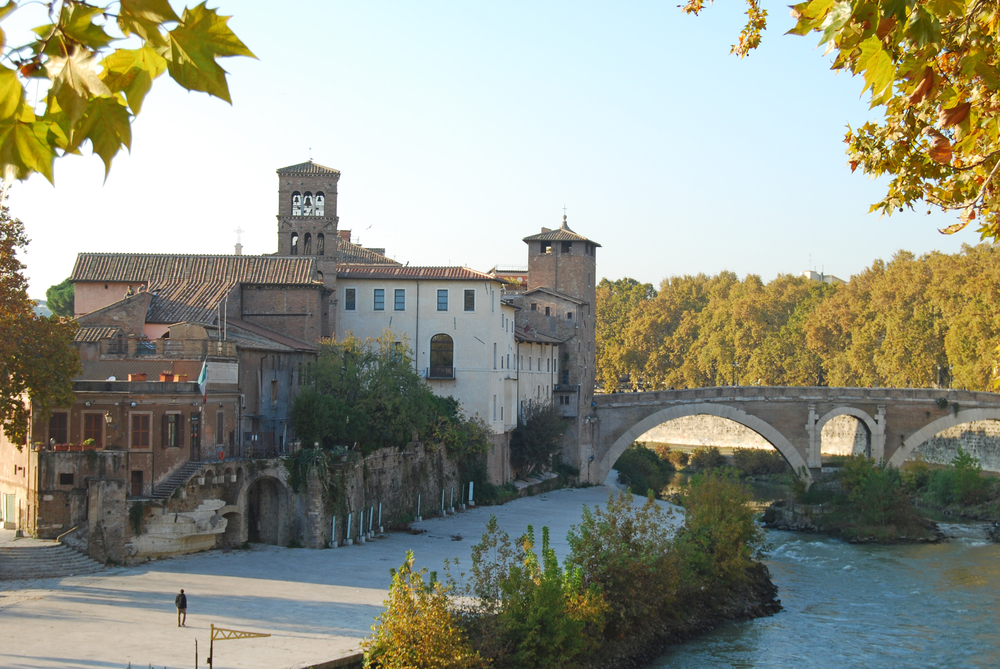 Tiber Island with the bell tower of the Church of St. Bartholomew

There is undoubtedly significance to the fact that, of all places, the relics of St. Bartholomew came to their final resting place in Rome at a location strongly associated with medicine and healing, an indication that this Apostle is an efficacious intercessor not only for problems of the nervous system for which he is the special patron, but also for medicine, physicians, and healing in general.

While many hospitals and medical centers are named for St. Jude, this was also the case with St. Bartholomew. London's historic St. Bartholomew Hospital, founded in the 12th century by a royal courtier named Rahere, is the subject of a famous medieval legend. From the account of The Friends of the Great Hall and Archive of St. Bartholomew's Hospital,

"Whilst in Rome, [Rahere] became very unwell and feared that he may never see his own country again. He began to pray fervently. During his fervent prayer, he promised God that if healed, he would found a priory hospital for the sick and the poor on his return home. When well enough, he began the long journey back to England.  It was on this homeward bound trek that he had a vision of St. Bartholomew and in this vision, the Saint told him that not only must he build this hospital but that he must also devote it to the Saint.

'I am Bartholomew, the apostle of Jesus Christ, that come to succor thee in thine anguish, to open to thee the secret mysteries of heaven – know me truly to have a chosen place in the suburbs of London at Smoothfield, where in my name thou shalt found a church and a hospital – wherefore do thou boldly – neither at the cost of the building doubt thee not – direct, build and end this work.'

In return, he would receive saintly protection that would ensure his healthy and safe return home."

St. Bartholomew is not well-known as a patron of medicine, physicians, and healing, and he may perhaps be an under-utilized saint for these causes. Coincidentally, St. Bartholomew shares his August 24th feast day with a title of the Blessed Mother invoked for physical healing: Our Lady, Health of the Sick.

If you or your loved ones are currently suffering from a medical condition, or if you are a health care professional, consider turning to St. Bartholomew as one of your heavenly intercessors. He would also be an excellent intercessor to turn to for help in increasing the virtue of purity in our hearts.

If this saint has already proved to be efficacious for you, please leave your story in the comments below to encourage our readers.

St. Bartholomew, pray for us! 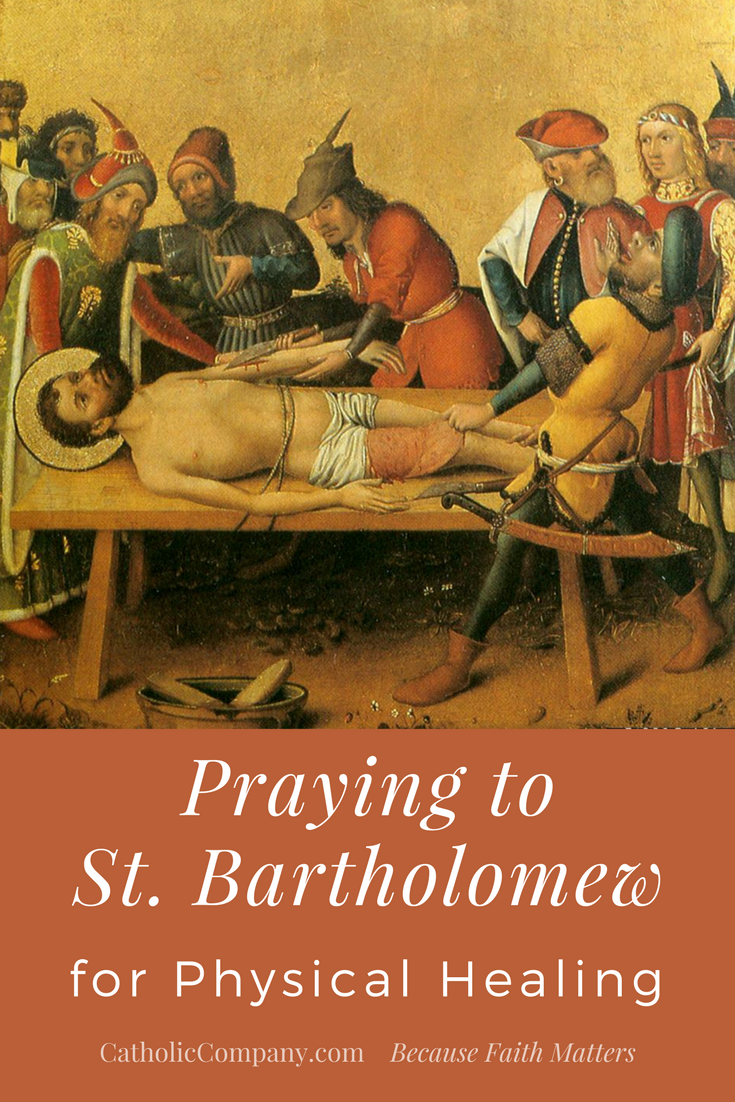