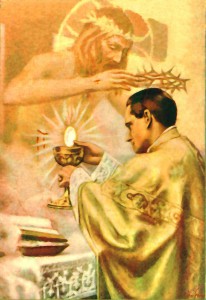 I love coming upon new saints and their writings that I've never heard of before. Today I came across the book The Hidden Treasure, Holy Mass by St. Leonard of Port Maurice.

St. Leonard was a Franciscan friar, preacher, and mystical writer.  Apparently he was very influential because St. Alphonsus Liguori, himself a Church Doctor, called him "the great missionary of the 18th century."

One of the things St. Leonard became well-known for was his great promotion of the Stations of the Cross; he reportedly set up hundreds of the stations across Italy.

In this mystical writing, The Hidden Treasure, Holy Mass, St. Leonard describes the many spiritual benefits of the Holy Sacrifice of the Mass.

This is interesting because we often hear and read many things about the benefits of receiving the Body and Blood of Christ, which are great and profound; but this book associates many graces and benefits with simply attending Mass itself, not just receiving the summit of the Mass which is the Holy Eucharist.

This should be a great comfort for those who cannot receive Holy Communion at Mass, for example, those who are not yet in full communion with the Catholic Church (such as those in RCIA classes now, or for whom starting RCIA is delayed) or those Catholics who for whatever reasons have not yet been restored to a state of grace following grave sin by receiving the Sacrament of Reconciliation.

There is great benefit in hearing Holy Mass (which is the greatest prayer of the Church) even for those who cannot partake of the Eucharist; there are still graces to be gained!

According to St. Leonard these benefits apply to the priests who celebrate Mass, to the acolytes who serve at Mass, and to the faithful who hear Mass with devotion; he even says that hardened sinners will benefit from attending Mass:

"Mass is the sun of the human race, scattering its splendors over good and wicked; nor is there a soul so vile on earth who, hearing holy Mass, doth not carry away from it some great good, often without asking, often without even thinking of it."

In this book he also describes how St. Thomas Aquinas (who had a deep love and reverence for the Holy Eucharist, and who wrote definitely on the doctrine of transubstantiation), after attending Mass himself as the celebrating priest, would go to assist at a second Mass that same day simply for the great honor and graces associated with doing so.

Here are a few great benefits St. Leonard attributes to the Holy Sacrifice of the Mass as written in this little treasure of a book (again, these graces are associated with simply attending or serving at Mass even apart from receiving Holy Communion):

And the points above were just a few of the many profound graces described; I pulled these out in just a quick glance through the book. In the book I also found these great quotes about the Holy Sacrifice of the Mass from the saints:

With such great graces associated with hearing Holy Mass (even if we do not have perfect devotion in our hearts every time) in the words of St. Leonard, "Holy Mass is the golden key of paradise; and while the eternal Father gives us this key, which of all His other benefits can he refuse?" Mass is a gateway of God's grace, let's not forget that and go as often as we can!