After his resurrection, Jesus continued to appear to his Apostles multiple times (and presumably the Blessed Virgin Mary, too). Undoubtedly they were much consoled and strengthened by his glorified physical presence among them following his brutal Passion. They were also given instructions on how proceed as the foundation of the Church was laid by these first bishops.

But this state of affairs was not to last for long. After a period of 40 days Jesus ascended into heaven to take his place at the right hand of the Father, his sojourn on earth finished.

What must it have been like for the Blessed Mother following her Son's earthly departure? After having the supreme joy of her life physically present with her for 33 years, he was taken away from her, and she had to live the rest of her life without him. Yes, she still communed with Jesus through his Real Presence in the Blessed Sacrament, but yet there must have been pain at this physical separation, and a longing for him that would not be removed until her own Assumption into heaven.

In the Life and Revelations of Blessed Anne Catherine Emmerich, one of the Church's modern mystics and visionaries, we are offered a glimpse of what the Blessed Mother's life was like after Jesus was taken up bodily into heaven.

"I beheld Mary in her last years, making the Way of the Cross . . . she was, at this time, advanced in years, though there was visible in her no other sign of age than an ardent desire for her transfiguration. She was remarkably grave. I never saw her laugh, and the older she grew, the fairer and more transparent became her countenance. She was thin, but I saw no wrinkle, no trace of decay about her; she was like a spirit."

Just as scripture tells us that Mary "stored all these things in her heart," so too she stored in her heart the mystery of the redemption accomplished by her Son. Our Lady lived the rest of her life contemplating the mystery of Jesus' Passion, Death, and Resurrection. Anne Catherine Emmerich beheld Our Lady in vision retracing again and again the steps her Son walked through Jerusalem in his last hours, remembering them for her future children, and uncovering—for the entire Church—the gems and pearls that lay hidden therein.

According to tradition, towards the end of her life the Blessed Virgin moved from Jerusalem to Ephesus (in modern-day Turkey). No longer able to retrace the steps of her Son's Passion where they actually occurred, she set up an identical Stations of the Cross on her property using stones and markings. This became the first devotional Stations of the Cross. This is described in detail by Blessed Anne Catherine Emmerich according to her visions, below: 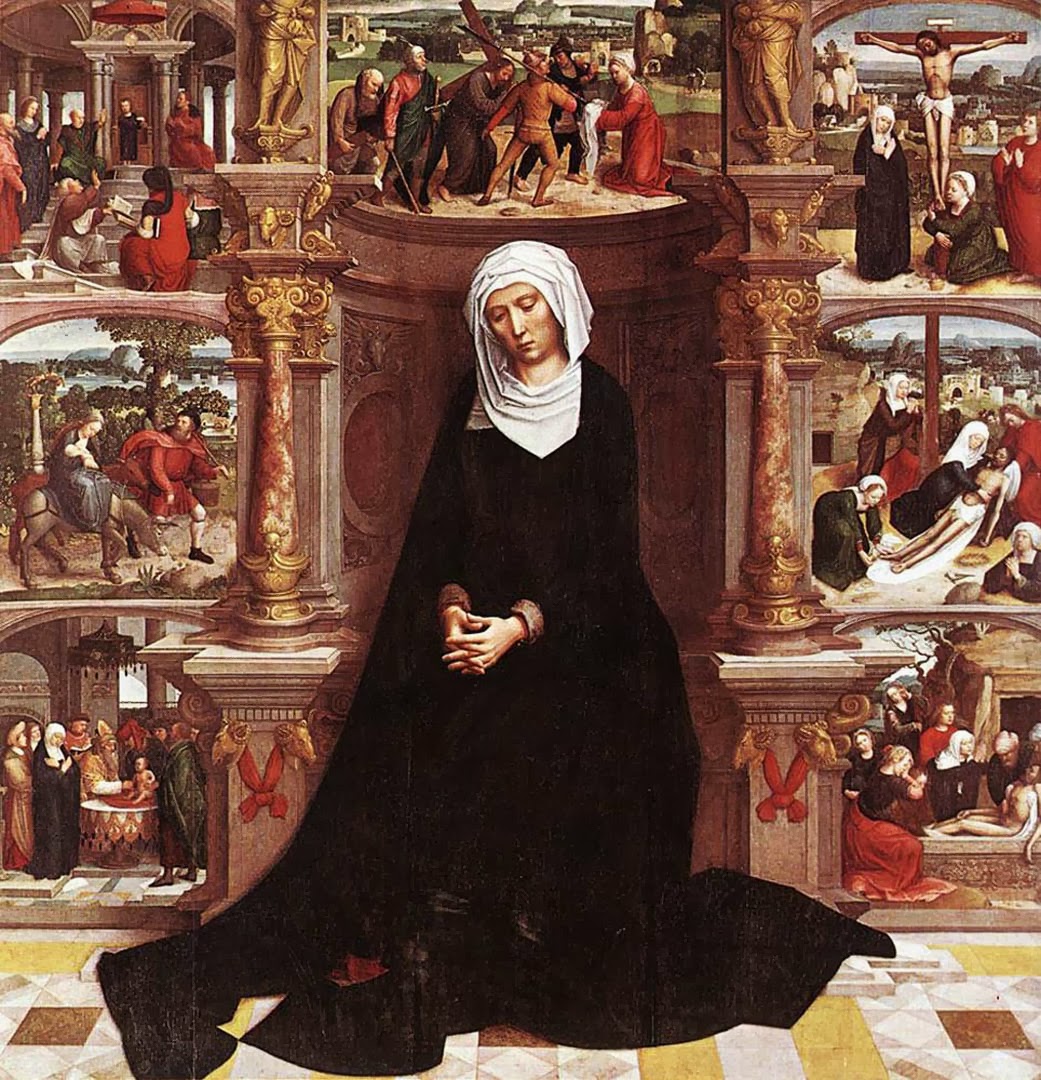 THE VIRGIN MARY ERECTS THE STATIONS OF THE CROSS

AT HER HOME IN EPHESUS

"Behind the house, at a little distance up the hill, the Blessed Virgin had made a kind of Way of the Cross. When she was living in Jerusalem, she had never failed, ever since Our Lord's death, to follow His path to Calvary with tears of compassion. She had paced out and measured all the distances between the Stations of that Via Crucis, and her love for her Son made her unable to live without this constant contemplation of His sufferings.

Soon after her arrival at her new home [in Ephesus] I saw her every day climbing part of the way up the hill behind her house to carry out this devotion. At first she went by herself, measuring the number of steps, so often counted by her, which separated the places of Our Lord's different sufferings.

At each of these places she put up a stone, or, if there was already a tree there, she made a mark upon it. The way led into a wood, and upon a hill in this wood she had marked the place of Calvary, and the grave of Christ in a little cave in another hill. After she had marked this Way of the Cross with twelve Stations, she went there with her maidservant in quiet meditation: at each Station they sat down and renewed the mystery of its significance in their hearts, praising the Lord for His love with tears of compassion.

Afterwards she arranged the Stations better, and I saw her inscribing on the stones the meaning of each Station, the number of paces and so forth. I saw, too, that she cleaned out the cave of the Holy Sepulcher and made it a place for prayer. At that time I saw no picture and no fixed cross to designate the Stations, nothing but plain memorial stones with inscriptions, but afterwards, as the result of constant visits and attention, I saw the place becoming increasingly beautiful and easy of approach. After the Blessed Virgin's death I saw this Way of the Cross being visited by Christians, who threw themselves down and kissed the ground." 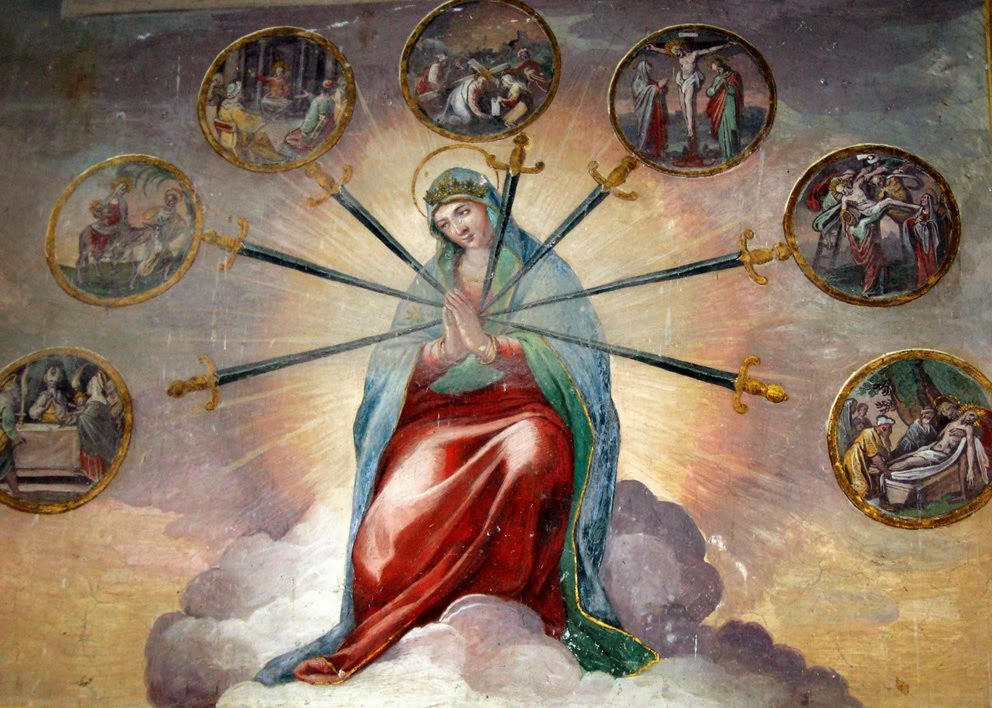 "I saw Mary in this dress following a road which she herself had laid out near her dwelling in memory of the last sorrowful journey of Jesus. At first, she went all alone measuring each step of the dolorous Passion which she had so often retraced in spirit since the death of her Son. Wherever anything remarkable had happened to Jesus, there she set up a memorial with stones, or made a mark on a tree if one stood near.

The road led into a little thicket which contained a hillock in which was a grotto ; and here was represented the tomb of Jesus. When she had thus laid off the different stations, she went from one to the other with her maid in silent contemplation, sat down at the places marked, meditated upon the mystery it recalled, prayed, and often arranged things still better. I saw her engraving on a stone with a stylus the particular circumstance of each station, or something of the kind. She and her maid cleaned out the grotto ; and made it fit for the tomb and for prayer. I saw no pictures nor crosses, but only monuments with inscriptions, all very simple. This first attempt of Mary to perpetuate the remembrance of her Son's sufferings became, in consequence of frequent visits and improvements, a very beautiful road to which long after her death, pious Christians went to pray. Here and there they used to kiss the ground."

When Mary's house in Ephesus was found using Blessed Anne Catherine Emmerich's visions as a guide, they also reportedly found her Way of the Cross behind the house.  The same Stations of the Cross that are erected in every Catholic Church, and which is traditionally prayed by Christians on Fridays—especially during Lent—is our spiritual heritage given to us directly from our Blessed Mother.  This is why it is also called the Via Dolorosa, or the Sorrowful Way, and is commonly prayed with the Stabat Mater Dolorosa hymn to Our Lady of Sorrows. It is her contemplation which gave us this treasure to bring us closer to the heart of her Son.

Will learning about this history of the Stations of the Cross change the way you use this devotion in your prayer life? 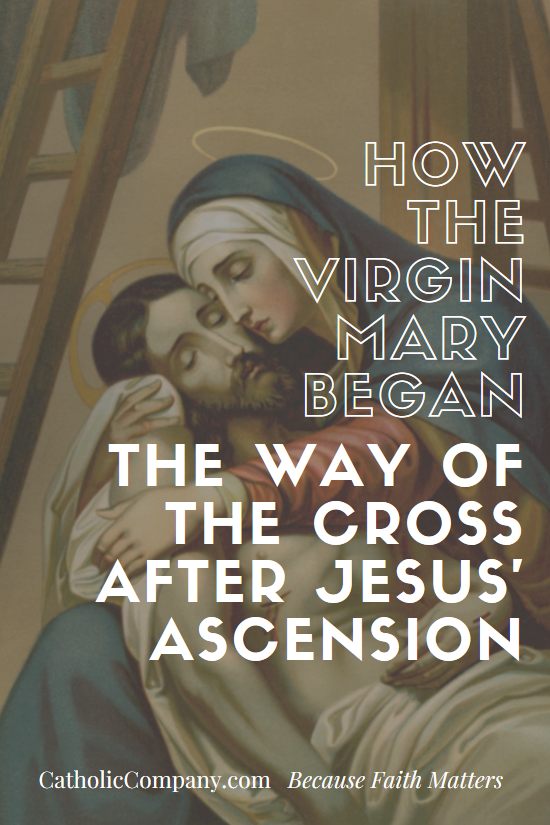