THE HISTORY OF THE STATIONS OF THE CROSS

The Way of the Cross has its origins with the Blessed Mother. It is said that she, who pondered all the mysteries of Christ in her heart, retraced the steps of her Son's Passion and the significant events that happened along the way, keeping in her memory, and for the memory of the Church, the sacred path on which the Son of God trod to accomplish our redemption.

Later in her life, when she was no longer living near Jerusalem, it is said that Mary continued this devotional practice by creating a similar outdoor path near her home with stone markers, along which she would walk, pray, and meditate on those things that happened to her Son on his Sorrowful Way.

For centuries, pilgrims to the Holy Land have walked the steps of Our Lord's Passion in Jerusalem, with "stops" along to way to pray and venerate near the places where a significant event is believed to have occurred (such as the place where Jesus met his Mother, where Jesus fell, and where Veronica handed Jesus her veil, etc.). 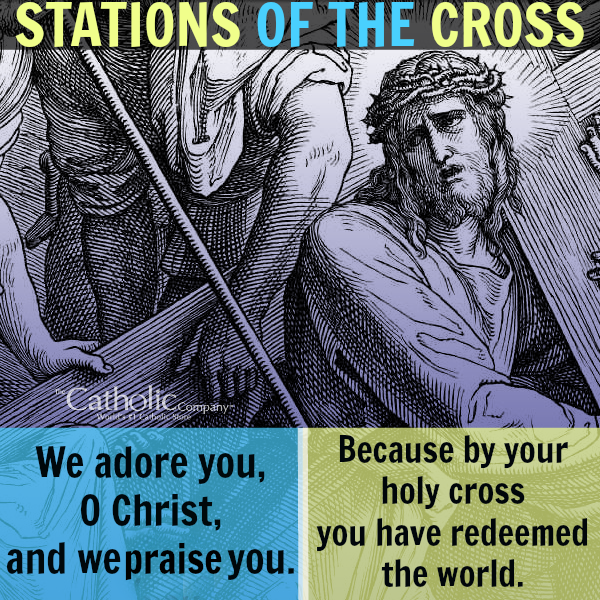 This devotional walk, known as the Stations of the Cross, became one of the most popular and useful ways for the devout to meditate on Christ's Passion. The Franciscans, a religious order with special custody of the sacred places in the Holy Land since the Middle Ages, brought this tradition to their churches in Europe in much the same way that the Blessed Virgin erected an imitation of the Sorrowful Way near her home.

Pilgrims who could not travel to Jerusalem could experience in a virtual way the Stations of the Cross by following a signposted path around the inside and/or outside of the church. Here the faithful would walk and pray and meditate on the sufferings of Jesus as if they were walking the real places in Jerusalem. Special indulgences were granted to those who made this virtual pilgrimage.

From the 18th century, by Papal decree, all Catholic churches were permitted to erect the Stations of the Cross in the sanctuary, with the number of Stations fixed to fourteen. A specific way of praying the Stations also developed, two of the most popular being the method of St. Francis of Assisi and the method of St. Alphonsus Liguori.

THE FOURTEEN STATIONS OF THE CROSS

HOW TO PRAY THE STATIONS OF THE CROSS

Although most popular during Lent, this season is not the only good time to pray the Stations of the Cross. It is always recommended to the faithful to meditate on Christ's Passion frequently, especially on Fridays as a perpetual day of penance, to obtain graces and grow in holiness.

“But especially I commend earnest mental prayer to you, more particularly such as bears upon the Life and Passion of our Lord. If you contemplate Him frequently in meditation, your whole soul will be filled with Him, you will grow in His Likeness, and your actions will be moulded on His. He is the Light of the world; therefore in Him, by Him, and for Him we shall be enlightened and illuminated.” -St. Francis de Sales

There are many ways to pray the Way of the Cross, especially by making use of the Stations of the Cross devotional tools mentioned below.

1. Attend a guided Stations of the Cross with your parish on the Fridays of Lent.

2. Using the Stations of the Cross inside your parish, spend a few minutes prayerfully meditating on each station (usually there will be an image depicting each station to help guide your time of mental prayer - so you don't necessarily need to carry a book with you).

3. Use a traditional prayer format (with a Catholic prayer book which includes the Stations, or with a separate Stations of the Cross booklet) to pray the Stations at home.

4. Pray the Stations with a Stations of the Cross rosary (see image below).

5. Pray the Stations virtually with the Via Dolorosa Experience DVD (video of the guided Stations tour in Jerusalem with the Franciscan Friars).

6. Pray the Stations with an audio CD at home or while commuting.

7. Pray with your children using children's Way of the Cross multi-media tools.

8. Design and erect your own Stations of the Cross for your home or garden. Get creative! 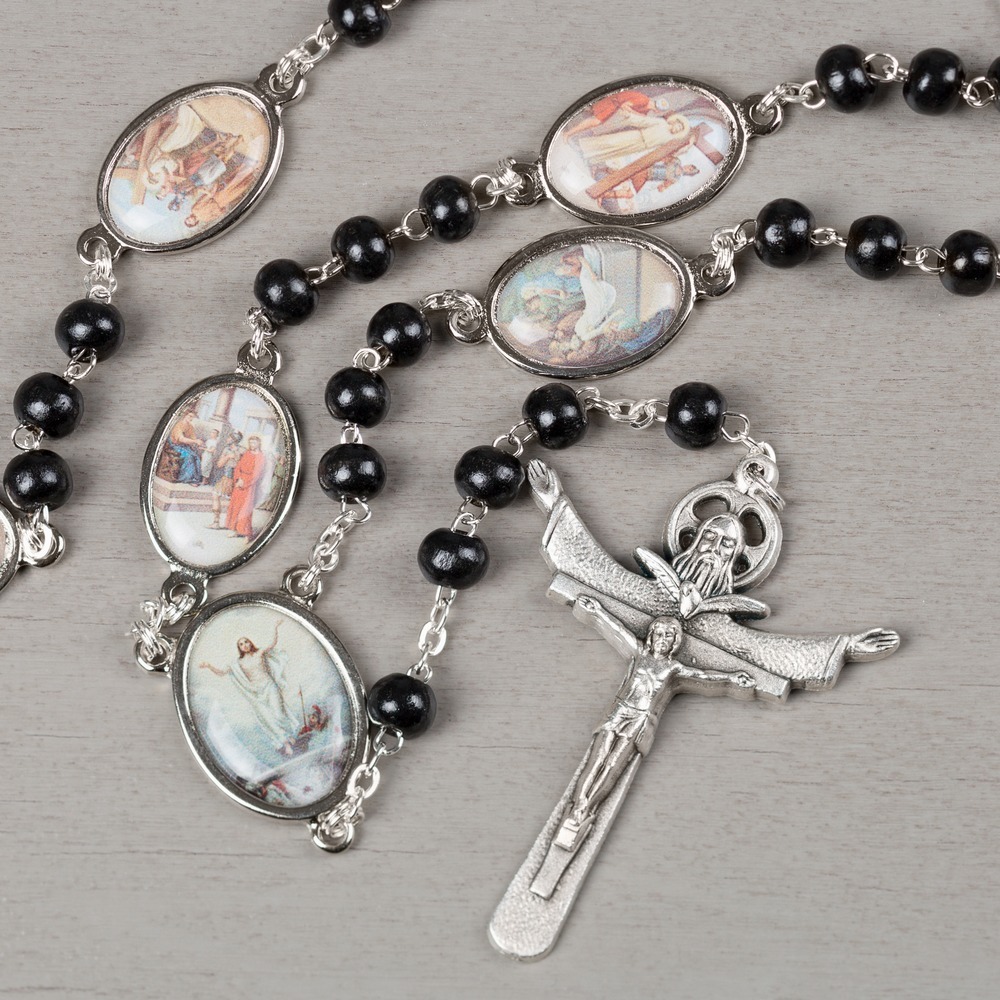 "There is no practice more profitable for the entire sanctification of the soul than the frequent meditation of the sufferings of Jesus Christ."
—St. Alphonsus de Liguori

What is your favorite way to pray the Stations of the Cross? Please leave your comment below! 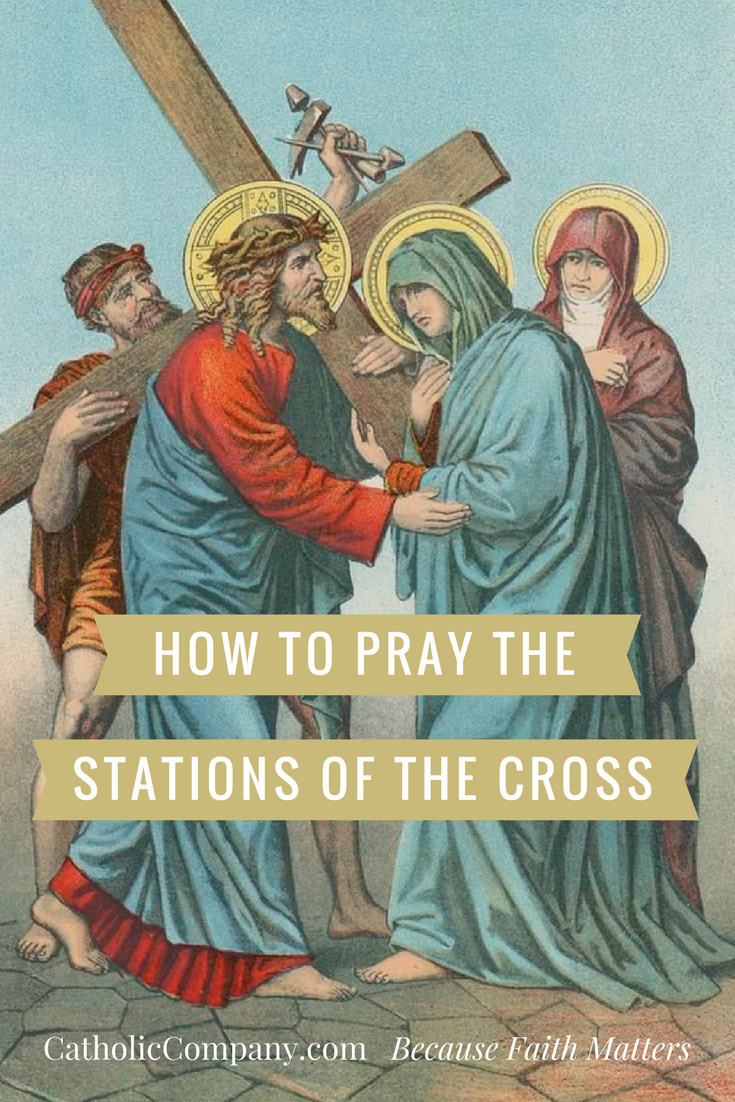